I saw an Ancient Murrelet today, May 24 2017 at Matinicus Rock, Knox county
Maine, I had seen one, presumably the same individual, last year at Seal Island in Mid May, that apparently was the first known record of this pacific species in Maine. Last year this bird was later seen at Petit Manan, Machias Seal Island, 120 miles east of Matinicus, then back at Petit Manan, in between.  Keenan told me this bird was seen Sunday May 21, 2017 at Machias Seal.  Again this is an Alcid from the pacific they nest in southern Alaska and British Columbia.
Last year Hiram Adair and I were  in the middle of  Seal Island exploring, having dropped off the camera repair man. Flying in with some razorbills was a tiny follower, must be a dovkie,  but no wha…it must be a pacific alcid, I had seen a few species in that tribe long ago this  one was not familiar and though at 16 I could have told you at 56 I needed to look at the book to see it was an ancient murrelet.
The bird was thick with the Razorbills who were tolerant, it reminded me of a razorbill chick at its parents side.  I had a feeling the bird would be around awhile, and did not rush back to get my camera but thought I could find it again when we headed in, but it wasn’t there when we headed in and was never seen out there again last summer.  Very grateful to have crossed paths with this elegant wee fowl I was also a bit sorry  not to have seen it again nor gotten a picture. (Though happily  Keenan had),  It certainly sharpened my senses, I kept an eye out for it.

So there it was again today, as I was rowing a girl ashore she said look at all the puffins and I looked and on the near edge of a raft of about 25 puffin in Calf Bite just off the boat slip was this lovely little floating fowl, we got a nice look before it flew off and around and landed inside Calf ledge briefly, we unloaded and loaded three dory loads and went to look for it.
There it is swimming on the edge of a raft of Razorbills (as according to reports it has been when seen at Petit Manan and Machias Seal) up it flies, not due to us, crosses our bow at 20 meters, 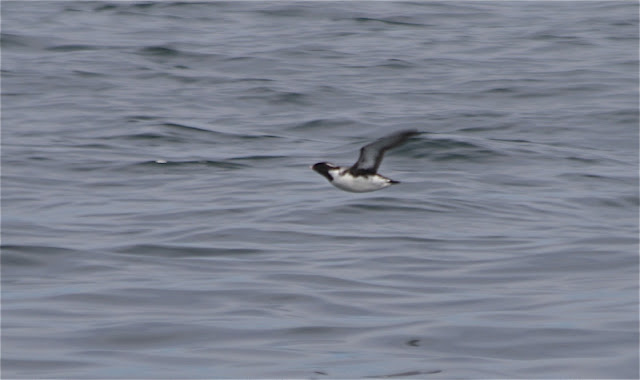 and flies around and up ashore and lands 30 meters from the boat house. 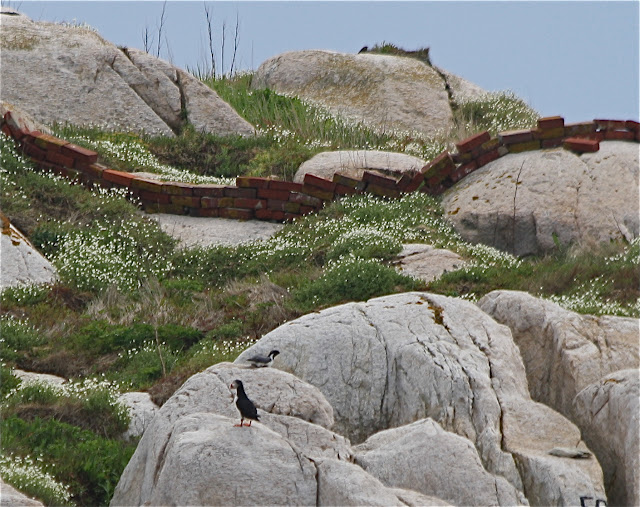 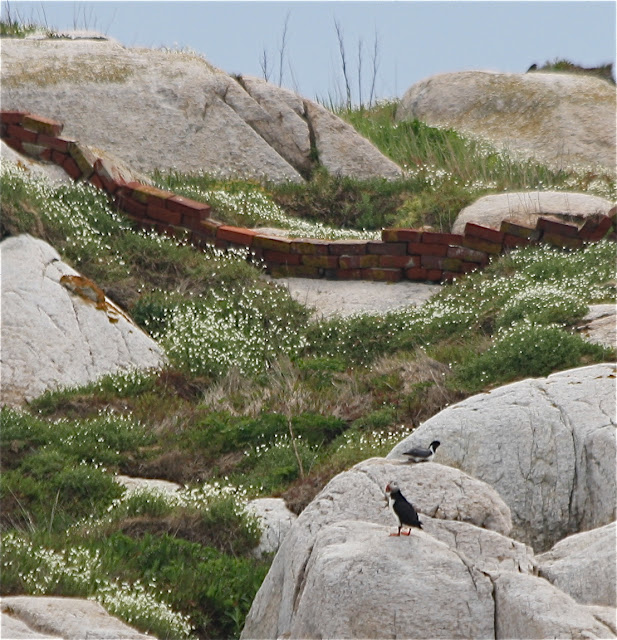 This aquatic quail chaffed around a bit on the fringe of some loafing puffins then it makes a short flight to the water near the boat slip just off our stern, 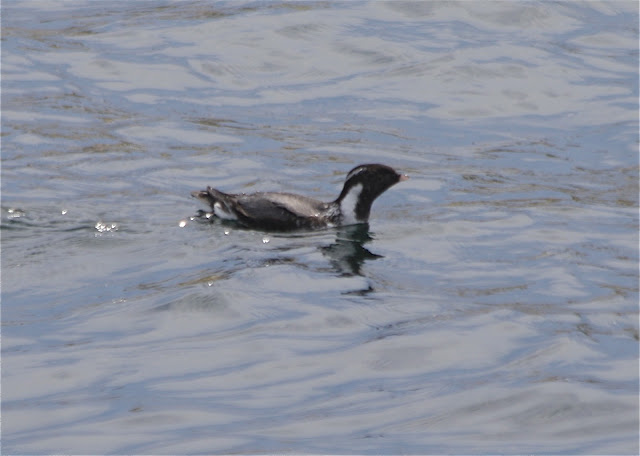 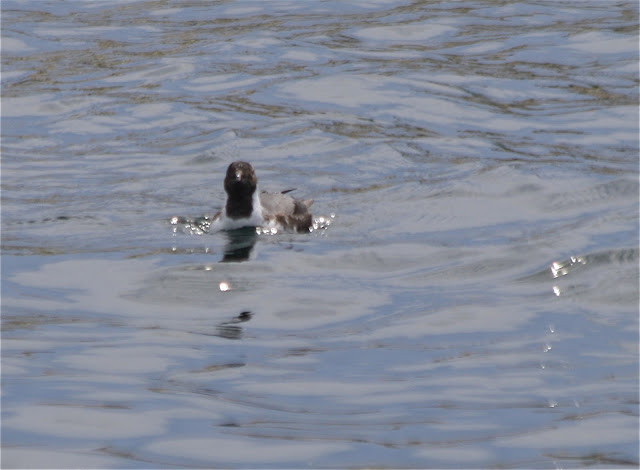 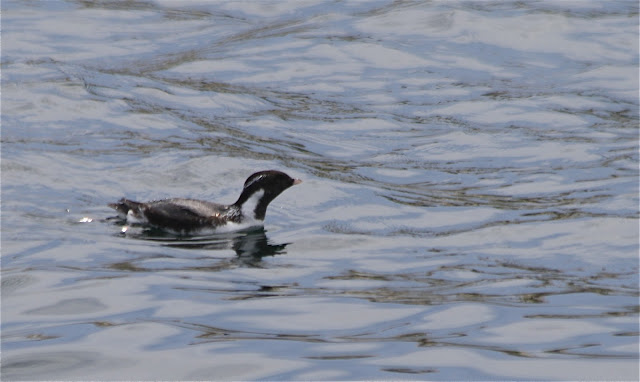 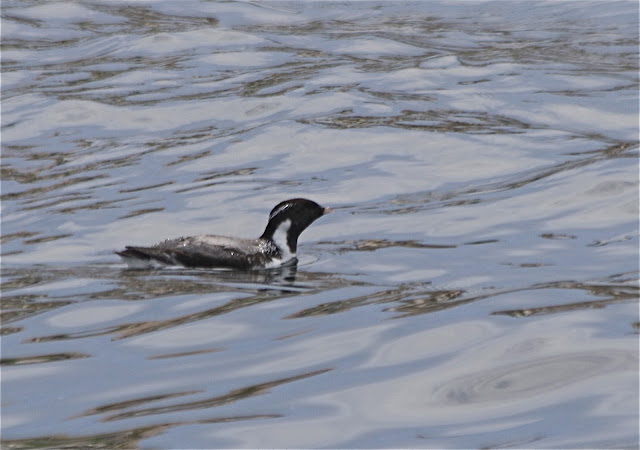 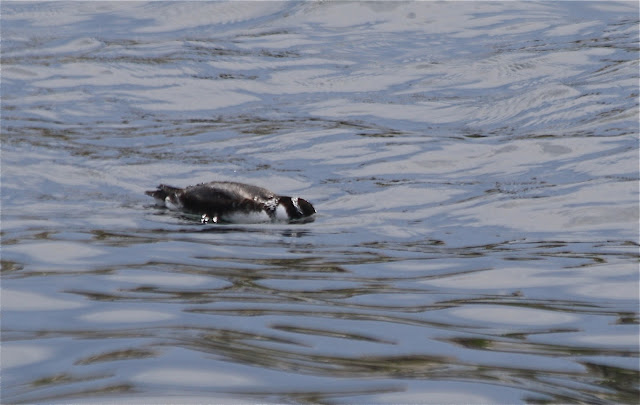 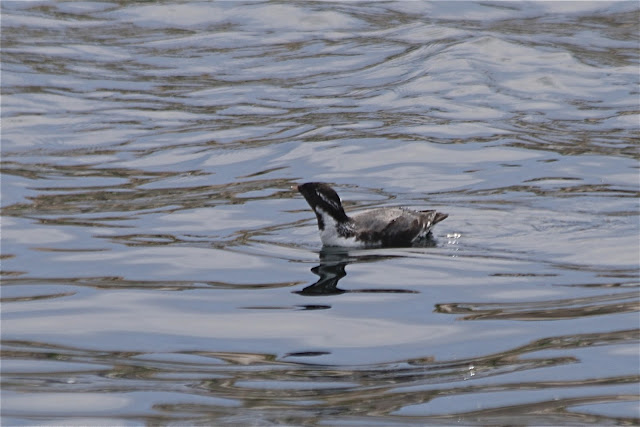 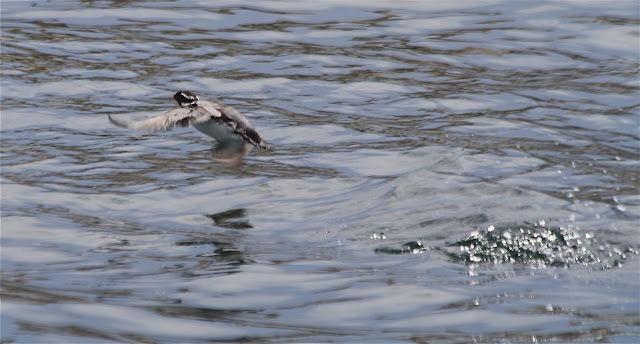 after a brief swim it flew ashore again, this time landing in the boulder shoreline among scattered puffins 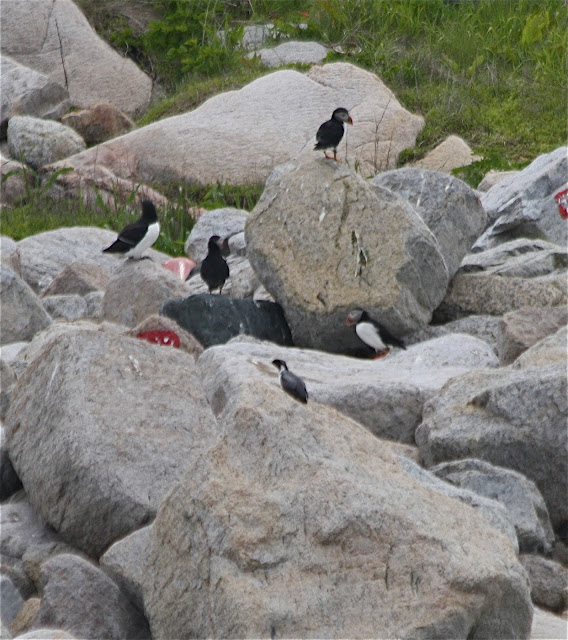 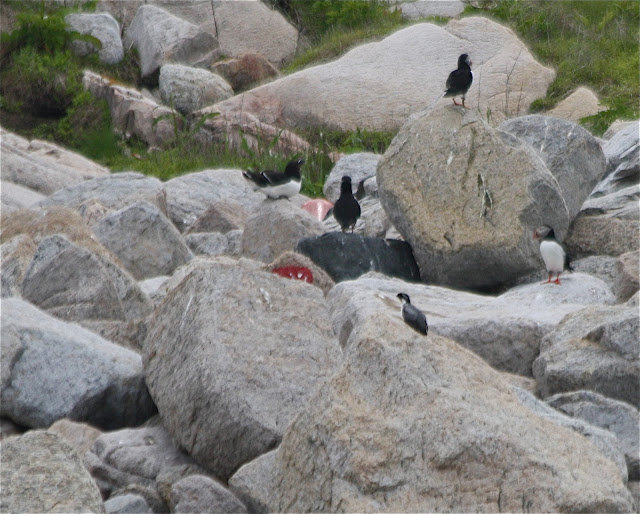 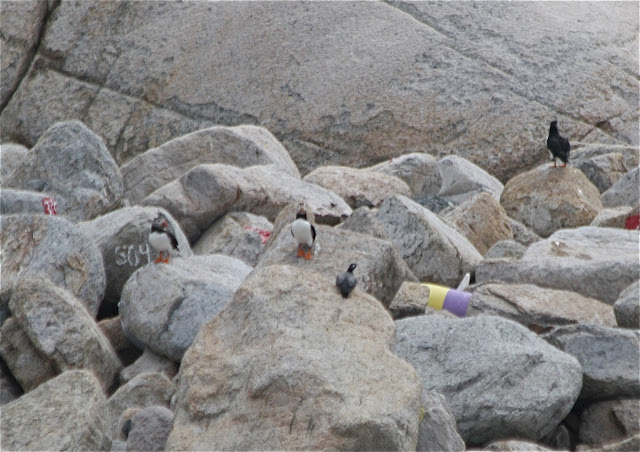 then after a few moments it moves a short bit not far from a dozen razorbills roosting on a boulder near the high tide line, 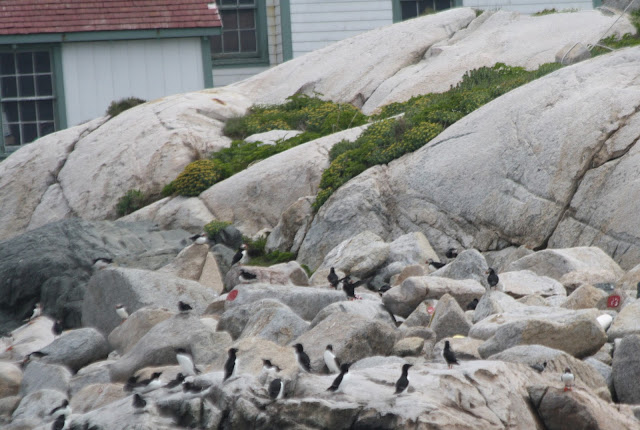 there it is on the bottom right not far from the boathouse. 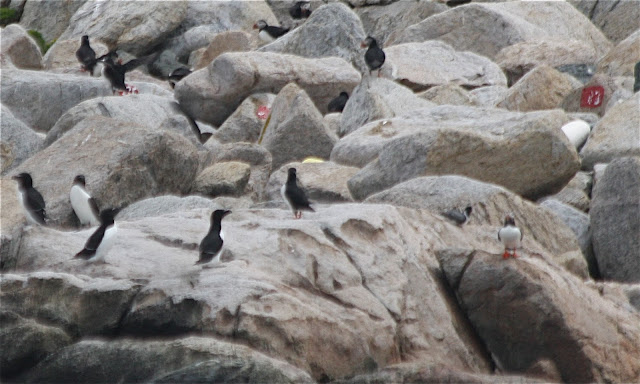 There it is.  (researchers paint numbers on the rocks to help keep track of nesting sites.

It settled in and we left it there.  We headed in at about 11:30
I have a website with information about boat rides to see the birds and all around here, maineseabirdtours.com  I often go to Seal Island.

I heard someone on the radio recently answer a question about seeing lots of Razorbills off Cape Rosier late summer during recent years.  The answer was basically that it must be climate change and that he had seen a gannet in the Kennebec river and that pretty much confirmed that.  There were other comments during the show that suggested that any of the recent changes in bird species ranges were attributable to climate change.

In 1970 there were high counts of about 20 razorbills at Matinicus rock, in 2012 there were high counts of 1,200 razorbills there, they are about 30 miles from Cape Rosier.  During recent years razorbills have become fairly common foraging in the shoal water close to the islands near Vinalhaven, and heading up  eastern and western Penobscot Bay, during the summer.
There are a lot more razorbills around here than there used to be and apparently some of them have discovered good resources foraging closer to shore.  There is no need to blame climate change for razorbills off Cape Rosier I think we can look on it as a pleasant development for birders up the bay, the result of the hard work done by the expanding razorbill population in the gulf of Maine.
A gannet on the Kennebec doesn’t seem particularly alarming either, I think we might see that as a nice surprise, another example of "the more you see the less you know", there was a lot of southerly wind for a spell at the end of last October and lots of gannets close to shore,  maybe it was following a sturgeon.
To blame climate change for every range change observed denies the dynamic nature of the ranges of species.
.